Type your search terms above and press return to see the search results.

Ongoing project start during a residency program at Rimbun Dahan 2016.

Upon my arrival in Rimbun Dahan, I started to recognize that there are many monkeys sharing living area with humans. However, we (humans) tend not to recognize them unless they damage our property or belongings. They mostly are seen as pests. Human and monkeys have different rules. Human claim the space by rights of ownership. We buy land for a legal paper that gives us the right to take over space. Monkeys, however, increase the members, roam around, and chase away other monkeys from different groups to claim their territory. 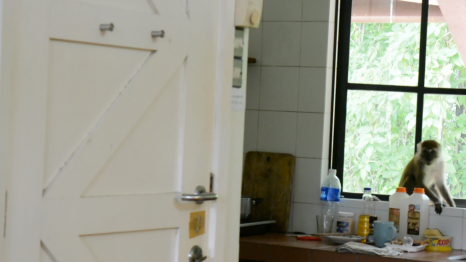 “In recent years, Malaysia’s Department of Wildlife and National Parks has killed almost 250,000 monkeys in every state in peninsular Malaysia. The monkeys have been deemed pests because of their large number and their ability to easily adapt to any urban environment. The target of missive extermination has been a long-tailed macaque. Long-tailed macaque is a small, mischievous monkey with an extraordinary long tail. It’s found throughout Southeast Asia and mainland Asia. In Malaysia, they commonly beg for food from tourists and sneak into open homes and garden to steal food.” http://animals.mom.me

In Malaysia, monkeys are commonly found in urban area and in the compound where I stayed. I first followed monkeys then in reverse, I tried to convince monkeys to follow me. By studying these monkeys in Rimbun Dahan, I mapped their trails in an attempt to locate their daily route(s). At the same time, I applied the monkey’s rules and practiced it in the human world, where different rules apply. Using myself (as a resident artist), I created movement to disrupt some of the regular activities in Rimbun Dahan. I asked to move rooms for the purpose of tracking the monkeys I was studying and end up unofficially moved into rooms that I was not assigned to. This movement created some uncomfortable reactions and complications among us, humans.

I put myself in the room which usually being taken over by monkeys. Residents in this room had experienced these monkeys stealing food and cloths, making noise and jumping on the roof.  This particular room located along one of the monkeys’ primary routes. The tenants are warned to keep their belongings in the cupboard to prevent the stealing. I, however, lived my life as normally as I could without following those warning. I paid the consequences with instant noodle, cooking oil, a bottle of salt, fresh vegetable, glasses and some art materials.

Are they in my room or I am in theirs? 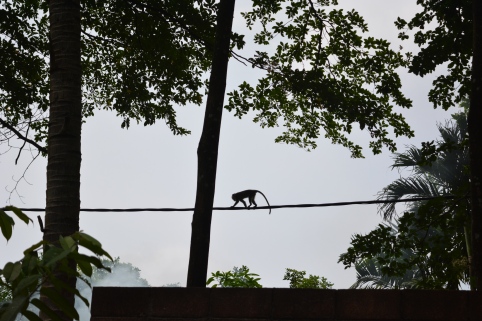